Gear You Ought to Know: A Review of Edelrid’s Ohm Assisted Braking Resistor Since moving to Asia the pool of climbers who are able to belay someone of my build has shrunk hugely. I’m 6’5″ and—despite losing a few kgs in the heat—a little over 100kg (220lbs). Most partners I find are around half my weight.

This means that even to top rope climb a sandbag, or two, is required and, with the odd exception, leading is off. I was aware of the Edelrid Ohm from various climbing media but it wasn’t till I moved out here that a solution to this problem was actively sought.

A look at Edelrid’s Ohm

Clipped to the first bolt, the Ohm is a camming device that adds resistance (ohms are a unit of measure for electrical resistance) to the rope when it is tight between climber and belayer. It achieves this by some cleverly designed geometry within the unit, which forces the rope into a v-groove to transfer some of the load to the first bolt. As I had to explain to a couple of belayers it is not an active device like a GriGri

—you still have to belay properly!

All this means that, for both catching a fall and lowering, the load transferred to the belayer is less than if using a normal quickdraw at the first bolt. In effect, the weight imbalance between the climber and belayer is removed. Using the Ohm will also reduce the risk of decking out when falling onto the first bolt only. When the rope is slack, the Ohm simply hangs in a neutral position. For use with 8.9-11mm diameter ropes, this device is mainly for climbing indoors and single-pitch sport climbing. Coming in on the scales at 360g it’s certainly not the lightest thing on my harness. Then again, it only stays on my harness until the first bolt, so the weight is not really an issue.

Edelrid has minimized the number of metal components by using lovely lime green plastic is non-critical areas. I feel the device may not actually function as well if it were lighter, the heavier mass means it is less prone to accidental engagement—more on that later. Straight out of the box the Ohm itself comes pre-assembled on a Maillion Rapide with Edelrid’s own dogbone and solid-gate carabiner. These components, together with the weight, give a very solid feel that certainly inspires confidence. The inclusion of the extra hardware probably does increase the price somewhat, but hey, you basically now have an extra quickdraw!

How to use the Ohm

To use the Ohm, there are some different options such as pre-rigging on a clip stick, pre-rigging on your harness, or using as you would a normal quickdraw.

I find that having the rope pre-rigged through the Ohm and then clipped to my harness on the anticipated clipping hand side is the easiest. This requires a little forethought and practice to ensure that the rope runs correctly through the Ohm and is not twisted but it doesn’t take long to sufficiently rehearse this.

Climbing and pulling slack through the Ohm were unaffected as far as I experienced using ropes in the 9.5-9.8mm range both newer and used. However, if using a furred up 11mm monster then I would perhaps expect some unintended resistance or accidental engagement. The Ohm pre-rigged on my harness ready to clip straight to the first bolt.

Putting the Ohm to practice

So long as there is a little slack in the rope and the belayer is laterally standing a little away (Edelrid recommends 1 meter ) from directly below the first bolt then the Ohm will engage if the leader falls or when the rope is weighted for lowering.

The difference is immediately noticeable. When I first took a lead fall with my belayer weighing some 40kg less than me he didn’t get violently slammed into the first bolt as usual but was able to give a simple, comfortable catch. When I had finished the route he was able to lower me normally as opposed to alternating between lowering me and abseiling back to the ground himself. The Ohm can either be retrieved as you clean the rest of the route or by climbing back up to the first bolt.

One area to keep an eye out for is if the rope has been weighted either from a fall or resting on a route and the device has engaged. In this scenario it is necessary for the belayer to shake the rope to disengage the Ohm and prevent the situation whereby the leader needs slack, the belayer gives it but the leader isn’t able to pull it through the Ohm. I’ve had this argument with one of my belayers so you don’t need to!

The Ohm is not to be used on trad protection as the direction of pull when engaged is upward, generally not the direction you’ve placed your first piece for.

To summarize, the Ohm is a great piece of gear for addressing climber/belayer weight imbalances. Using sandbags or ground anchors restricts the belayer so they cannot move around to give slack and they won’t be able to give a soft catch.

The Ohm allows the belayer to move freely while still providing a helping hand with the physics of catching a heavier climber. I picked up the Ohm for around US$139 so it’s definitely an investment. However, it inspires confidence that your belayer won’t get slammed into the rock and that they can give a comfortable catch/lower. And for me, well, it means I can go climbing! 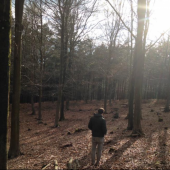