Planning a Climbing Trip to Getu? Here’s What NOT to Do Wait a minute, we’re actually going to steal a boat?

I stared with a slightly incredulous look at our climbing crew, their faces illuminated by headlamps and the torchlight from iPhones with rapidly dying batteries. He flashed a grin and we laughed at the absurdity of our current situation. Well, most of us laughed. One girl had disappeared into the bamboo to be alone, consumed with stress, and we’d just lost someone else down the riverbank. Presumably, he was still hoping to find an alternative option. Six foreign climbers with full gear bags stuck in the pitch black night, in the heart of rural China, two kilometers from the tiny town of Getu … on the wrong side of a rather large river.

As two from our team started stripping off for the bold swim across to the boat we hoped was moored somewhere on the black mass that was the opposite riverbank, images of life in a Chinese prison flashed through my head.

To anyone with the necessary political clout,

Hey guys, Um… do you think you could come bail me out of this labor camp? That would be great. Thanks.

I can’t believe this is only day one. I don’t remember the Petzl RocTrip 2011 making Getu look quite this intense …

We made it! We were finally here in Getu, China. Well, we were pretty sure we were anyway.

The driver we hired had pulled over in the small village, but he seemed a little uncertain we were where we wanted to be. It was tiny. A cluster of houses with the odd attached restaurant lining the end of the long road that led down the center of the Valley. The Getu Valley. Rock climbing Mecca of China.

We’d passed Pussa Yan on the drive in—the iconic, triangular cliff stretching 180 meters into the sky—and now we were desperate to get to the Great Arch.

After a very friendly, highly entertaining and totally unintelligible attempt to converse using an app that translated our spoken English into Siri-like spoken Mandarin, our lovely driver took us a little further and dropped us at the tourist center. Boasting a carpark so large you could probably fit the entire township into it, the tourist center was ready to host tens-of-thousands of visitors a day. But for now, we pretty much had the place to ourselves.

The tourist center stands at the entrance to the Great Arch National Park and was built in preparation for an influx of visitors after recent development of both the crags in the area and a tour through the lower river arch. However, for whatever reason, it appears the traffic to the Valley is not as high as anticipated yet. Still, there were a large number of Chinese tourists passing through the area each day while we were in town. After managing to find the one staff member willing to try their English out on us, we each purchased a week-long pass granting us entry to the park for CNY 60 ($9 USD).

Finding somewhere to stay was another fun challenge, as our Mandarin was limited to ‘Hello,’ ‘Where is the toilet?’ and ‘Thank you.’ But after spotting a Petzl flag, we made a beeline for that building. The accommodation was perfect. CNY 60 per night for a twin or double room ensuite, climbing posters, and guidebooks everywhere, a couple of comfy hammocks, and a great deck to chill out on, too.

Itching to get on the rock, we headed off to the end of the road again and entered the Great Arch National Park. The Great Arch lies a kilometer or so from the park entrance, and while there are green open-air tour buses that shuttle tourists up the road, as a climber, you’ll have to make the walk. After about five minutes, the Arch came into view, and the photos really can’t do it justice. It was breathtaking. Full of renewed energy, we rushed another five minutes down the road to a river crossing. The river isn’t giant, but it is fairly large and deep, and the only way across is to call out to the boatman and pay CNY 1 each for him to come across from the opposite bank and ferry you over on a large barge-like boat. It is important to note at this point that the boatman expertly propelled the craft with a large bamboo pole, however, we did find out later that it also had a motor …

Once across the river, the hike up to the Great Arch was a rather strenuous trip, and while I didn’t count the stairs (too busy sweating up a storm), there were a lot of them. But needless to say, it was beyond worth it. The Buddha Cave, which you reach first, contains an incredible set of drums that you can hear across the Valley, and the view as you climb is stunning. Sharply pointed karst mountains and the lurid green river, framed by the mouth of the cave.

The Arch itself is magnificent and standing inside the towering structure, the air is thick with the noise of thousands of swallows and the echoing cries of tourists enjoying the acoustics. There is also a toilet block in the Arch (remember to take your own tissue) and during the day a couple of local ladies set up and sell some basic fried street food, but you would be wise to pack a proper lunch.

Starting on the left side of the Great Arch, we roped up and enjoyed an afternoon of challenging ourselves on the amazing limestone. We had a wide range of abilities in our group, but we found there was something for everyone, and the route of the day was Dunman (7a), my personal favorite.

The funny thing about climbing in Getu is the attention you get from the Chinese tourists. As we were almost all expats working seasonally in Hong Kong and China, we were used to being asked for photos multiple times a day, but the sheer number of people passing through the Great Arch meant that you were climbing with a crowd of up to 40 people watching intently. The collective gasp and small screams when someone fell were actually quite entertaining, but it certainly brought a new dynamic to each climb.

Around 5:30 pm the number of tourists had dwindled and stopped. Enjoying the newfound tranquility as dusk fell, we pulled out our phones and headlamps (only two of us came prepared) and climbed for another three hours. Eventually, we packed up to head down, and at this point, we finally remembered the trip we had yet to make back out of the park and the requisite river crossing.

High on endorphins (that’s my excuse and I’m sticking to it), we rushed back down the steps talking through options and eventually coming up with the wild plan of attempting to commandeer the boat to propel ourselves back to the other side. There is no real infrastructure inside the park, and the option of swimming across would mean that we had to leave all our gear on the riverbank in the bamboo somewhere and retrieve it in the morning.

However, upon reaching the river, our plan was temporarily thwarted when we discovered that not only were there no people left in the park, there was no boat on our riverbank either. Shining our torchlight across the water, we could see the craft that had brought us across moored in the gloom on the other side. At this point, one of the girls took off to stress by herself, and we lost one of the boys somewhere down the riverbank while he presumably searched for an alternative option. Out of the remaining four of us, Henesey and Carrie volunteered to brave the water containing who knows what other creatures, and I hung out on the riverbank contemplating the conversation I would have from prison with the New Zealand Embassy in China.

The upshot of our wild night was that the boat was chained (my conscience secretly cheered), and Carrie and Henesey wadded across the river, dripping wet and in their underwear, on the side of the road to flag down any last vehicles that happened to pass through the park. There was a small farming village downriver, and after half an hour, a family traveling home drove past on a motorbike and small truck. I can’t imagine what the kids growing up in that family will tell their grandchildren about the day they were stopped on the road by two naked foreigners in the middle of the night!

After yet another confusing experience attempting to communicate our predicament using primitive sign language, those of us still stuck with the gear called across, and they understood our need for a boat. The lovely family waited with our two sodden climbers while someone raced into town on the bike. He returned accompanied by a man with a key who was able to unlock the boat and ferry across to rescue us. Thankfully our lost friend returned from his excursion at this point too (there was a period where we legitimately wondered whether he’d been eaten by something in the dark, but I’m pretty sure that was just the adrenaline).

The best part? Upon finally reaching the opposite bank with all our gear still in tow and dry, we attempted to pay our rescuer, but he refused the money. He pulled out his phone and translated a sentence for us:

I am the boss you live.

It turned out he owned our hotel! We delightedly pondered how he could possibly know it was us while he shipped all six of us back to town in his 5-seater car, but there really wasn’t much to ponder. There were six foreigners staying in Getu that day. They rolled into town in the morning, took off to climb, and then weren’t seen again until someone rode into the village in the middle of the night with a story about six idiot foreigners stuck on the other side of the river.

…I guess the whole town knew it was us.

For the full story of our day, check out this Vlog post:

Top tips for a climbing trip in Getu

1. Stay at the place with the PETZL sign. ‘Nuff said. The wifi is also really good.

2. There is a truck that rolls down the road occasionally with a loudspeaker shouting in Mandarin. It sells fruit. Stop it and buy some.

4. Take some snacks (and fruit!) for breakfast and lunch. You will be limited to small family restaurants, which do amazing meals for dinner, but the breakfast fare seems to be noodles. Every. Single. Day. It ends up being a lot of noodles, and the small snack shops sell mostly biscuits, chips, and prepackaged chicken feet.

5. And most importantly, do yourself and the lovely hotel owner a favor and get back in time to catch the boat. 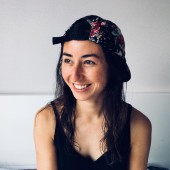 Tamsin Danielle is a full-time adventure traveller, dirtbag climber and YouTuber. She has no home-base, ran out of money a long time ago, and always forgets her headlamp.